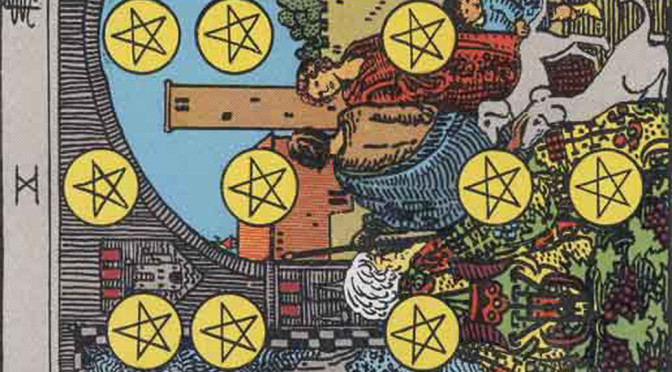 What are the pip cards?

The tarot consists of three distinct types of cards. The first two are similar to those in a standard playing deck in the United States:

1: 40 Pip Cards, 10 in Each Suit:  Four suits of numbered cards, ranging from 1-10. Historically the names and symbols representing the four suits have varied by country. Almost all versions of the tarot used spiritually today are derived from the original Italian model:

These cards are known as pip cards. The word may derive from the Old French pepin (seed) and refers to the dots or shapes on dice, dominoes, or playing cards that represent its value.

2: 16 Face Cards, 4 in Each Suit: While regular playing cards have three face cards per suit, a King, Queen, and Jack, the tarot has four: a King, Queen, Knight, and Page. These are also known as the court cards, since each group looks like a royal court in miniature. This name is a corruption of the original “coat cards”, in reference to their clothing. Their appearance signified their rank, role, and association with a particular suit, like a coat of arms.

3: 21 Trumps and a Wild Card or 22 Trumps:  As discussed previously in the Fool blog, the tarot deck was originally used to play a game similar to bridge. It has an additional fifth trump suit of twenty one cards and one wild card, the Fool. (Although all 22 are considered trumps in contemporary literature.) Each card depicts a symbolic figure like Justice, Death, or Temperance and are often numbered to represent their relative value in trick taking.

Where do the meanings of the pip cards come from?

Like the trump cards, both the meaning and appearance of today’s pip cards are greatly influenced by mid 18th to early 20th century thought.

A: Suits and Social Hierarchy: The French author Antoine Court de Gebelin (1725-1784) was one of the first to suggest an Egyptian origin for the tarot in his Le Monde Primitif (1775-1784). He believed the trump cards preserved a book of hidden wisdom and the four suits represented different divisions of Egyptian society:

Other period French authors suggested a similar origin for the suits of spades, hearts, diamonds, and clubs but from a medieval context. These associations continue to influence the meaning of the four suits. For example, the suit of coins may represent literal money, the physical body, and practical solutions, all derived from its connection to the material world.

B: The Four Suits and the Four Elements: The French author Alphonse Louis Constant (1810-1875), writing under the pen name Eliphas Levi, is best known for popularizing the theory that the twenty two trumps of the tarot and the twenty two letters of the Hebrew alphabet were related. He also taught that the four suits represented the four classical elements:

Much of the meaning of the pip card comes from this relationship, with each suit taking on the qualities of its associated element. For example, the suit of cups may represent emotions, the unconscious, and intuition, all derived from the symbolism of water.

C: Major and Minor Arcana: The French author Jean-Baptiste Pitois (1811-1877), writing under the pen name Paul Christian, popularized the concept of the tarot as a hidden book of Egyptian wisdom in his Historie de la Magie (1870). He claimed to translate an ancient Greek text describing an Egyptian initiation inside the Sphinx and a pyramid using twenty two sacred images. He taught that the tarot trumps preserved this mystery.

In his earlier L’Homme rouge des Tuileries (1863), a Benedictine monk discusses a book of 78 arcana with Napoleon, modeled on the tarot cards. Arcana is the plural of arcanum (Latin, secret), wisdom available only to those initiated. His contemporary Eugene Jacob (1847-1942), writing under the pen name Ely Star, would separate these into the Major Arcana, the trumps, and Minor Arcana, the pip cards in his Les MystÃ©res de l’Horoscope (1888.)

This late 19th century division still plays an important role in divination today. While the trumps represent something transpersonal, meaningful, or long lasting, the pip cards suggest the personal, mundane, or temporary instead.