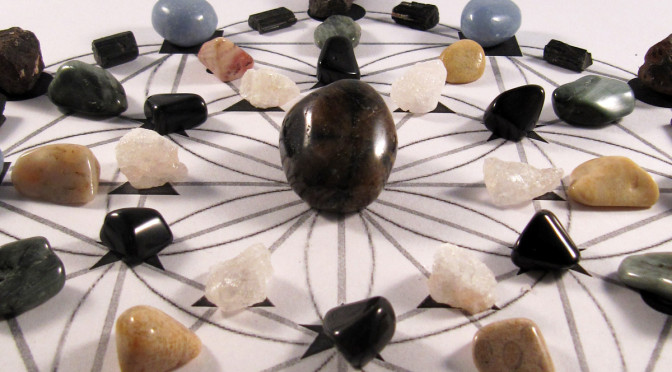 Salt is the common name for the mineral halite (NaCl, sodium chloride), a combination of the metal sodium and chloride, an ion related to the gas chlorine.  The name comes from the Greek halos “salt, sea” and the suffix “ite”, derived from the Greek lithos, “stone”  It is pronounced “hay-light”.

The main metaphysical properties of salt are:

* Abundance, manifestation, and anchoring spiritual energies
* Connecting to the ocean, the Moon and its cycles, and grounding spiritual energies into the material plane
* Devotion, spiritual development, and an alchemical return to wholeness
* Hospitality, house warming, and domestic harmony
* Purification, spiritual protection, and releasing unwanted influences
* Insights on life, death, and spiritual rebirth
* Intuition, balancing the emotions, and altered states like dreaming
* Traditionally used for physical well being, vitality, and longevity

The metaphysical properties of salt are derived from a wide range of influences like its functions in the body, cooking, and industry, its association with the ocean and Moon, and its uses cross culturally.

1: Life, Death, and Rebirth: The liquids in the body like blood carry a memory of the ocean.  They have a chemical makeup similar to seawater, although the exact proportion of minerals is different.  Salt reminds us of the origin of life.  Salt is also necessary for life, used by the nerves, digestive system, and for fluid regulation, but too much brings death instead.  For example, conquered enemies may have had their land “salted” in antiquity, salt spread over their soil, to discourage reconstruction because of crop failure.  However this harsher quality of salt may also be harnessed for “beneficial destruction”.  Salt is used to preserve food and clean wounds because it discourages the growth of microorganisms.

Because of its traditional medicinal uses and connection to the origins of life, salt is said to support physical well being, vitality, and longevity.  It also has more metaphorical associations with life and death.  Water often represents spirit.  Because salt dissolves in water but may later precipitate out as new crystals, salt symbolizes both the body and its rebirth, resurrection, and immortality. Similarly salt water is a common tool in the metaphysical community to return people, places, and objects to energetic wholeness.  Just as it dissolves in water but can later recrystallize, salt represents the alchemical process of things being broken down into their individual elements, purified, and returned integrated to the whole.

2: The Ocean, Moon, and the Feminine:  Deposits of rock salt were created by the evaporation of shallow seas millions of years ago.  Because of this literal connection to the ocean and the Moon, the classical ruler of all water, salt is given qualities culturally associated with the “feminine” like balancing the emotions, intuition, and altered states like dreaming.  Because of its age, salt that is mined rather than evaporated from sea water is associated with deeper emotional patterns, like those rooted in our childhood, the past, or past lives.  Rock salt usually contains trace amounts of other minerals, especially gypsum (selenite), another mineral closely associated with the Moon.  Lunar substances like salt and selenite are said to support personal growth, bless the home, and help individuals spiritually harness the cycles of the Moon.

3: The Cube of Earth, Manifestation, and Anchoring Spiritual Energies:  Although it comes from the sea, salt is an ancient symbol of the Earth instead because of the cubic growth of its crystals.  The cube is a symbol of stability, equality, and the material world, often paired with a celestial sphere.  A cube or groups of cubes were often the model for temples, altars, and thrones historically.  It expands the symbolism of the square, representing things like the four directions, to six, because of its six faces.  Six based geometric figures like the hexagram (Star of David) symbolize the union of opposites like male/female, the six directions (East, South, West, North, Above, and Below), and concepts like the six days of Creation in the Bible.  Because of salt’s relationship to the cube, it is associated not only with grounding but manifestation and anchoring spiritual energies into the material world, mirroring cosmology like sacred architecture.

4: Incorruptibility, Purification, and Protection:  Salt represents the Divine and our own spiritual development because of its incorruptibility.  It does not spoil and prevents other things from spoiling.  Because of its preservative qualities and association with holiness, salt is cross culturally used for purification, spiritual protection, and releasing unwanted influences.  Many religions use salt against “spiritual decay” by sprinkling it, creating circles, lines, or piles of it, and adding it to holy water.

5: Abundance, Hospitality, and the Sanctity of the Table:  Like all former luxury goods, salt continues to carry the signature of abundance.  It was once so precious that your proximity to it at meals revealed your social standing.  Nobility were seated “above the salt”, closer to the head of the table.  Cross culturally the sharing of salt, especially the sharing of salt and bread, became a symbol of hospitality, friendship, and mutual respect between guest and host.  Those who had shared salt together should not harm one another.  Salt became associated with peace, domestic harmony, and the sanctity of the shared table.  Many cultures in antiquity, from the Greeks to the Jews, added salt to their offerings. This not only purified them spiritually, it adapted a custom for honored guests to show respect to the Divine.  Salt came to symbolize a renewal of one’s relationship to God.

6: Colored Salts and Specific Chakras: Salt may be colored by trace inclusions of other minerals or deformations of its crystal structure that change the way light passes through it.  Contemporary metaphysical sources associate these colored varieties of salt with the chakras that correspond to them in color.  Because of salt’s association with the ocean and emotions, they are also said to balance feelings attributed to those chakras.  For example, modern sources say pink halite is connected to the heart chakra and balances feelings related to love, self worth, and one on one relationships. 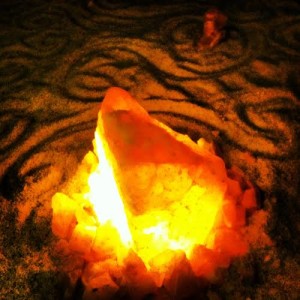 This handout was produced for “The Sacred Mysteries of Salt”, a workshop on the metaphysical properties of halite, presented by Stacie Coller and Christopher Lee Matthews of the Metaphysical Department of Enter the Earth and hosted by Jodie Appel of Asheville’s Therapeutic Salt Cave.

Enter the Earth is located at 1 Page Avenue Suite 125 Asheville, NC 28801.  For more information about the Metaphysical Department, please visit www.etemetaphysical.com or contact us at 828.350.9222.

To see our upcoming workshop schedule, check out: