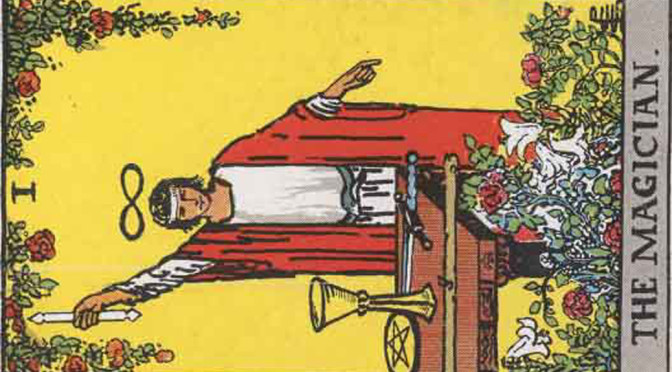 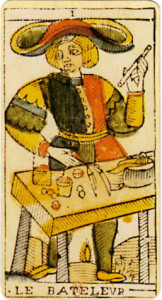 (18th century Magician card, from the Jean Dodal version of the Tarot de Marseille, after which most 19th century esoteric decks were based.)

The Magician depicts a colorfully dressed street performer, holding a stick, standing behind a table with props used either for sleight of hand or games of chance.  It was originally known in Italian as Il Bagatella, which may mean “a trifle”, something almost worthless. It has a low value when used as a trump.

In other versions of the game, the Fool (0), Magician (1), and World (21) are special cards known as bouts (French, “ends”) instead. They are found at the ends of the trumps, as the unnumbered, first, and last cards. If the Magician (1) is played during the last trick, it scores extra points. All three of the end cards are worth additional points later when scoring. Technically the Magician should be the lowest ranking card but is made valuable in certain situations by changing the rules. This reflects period beliefs about the transgressive character of magicians, similar to the Fool card.

Confusingly Il Bagatella is often translated into English as “The Juggler”. The meaning of the word has narrowed over time. Juggling originally referred to any activity like acrobatics, sleight of hand, or illusion that was a form of “magic” distinct from witchcraft.  Although popular as entertainers, the magician was an ambiguous figure because of their wandering lifestyle and association with gambling, deception, and idleness. 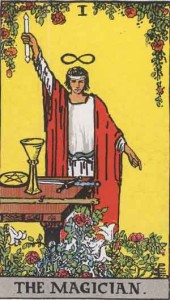 (The Magician card from the early 20th century Rider-Waite deck, after which most of our contemporary decks are designed.)

Authors during the 19th century radically transformed both the appearance and meaning of the Magician card. They believed the objects on his table represented the four suits (stick = wands, knife = swords, bowl = cups, ball/coin = coins) of the tarot.  Some versions also include a pair of dice.  While two dice can produce 36 different number combinations, only 21 are unique pairs. They may symbolize the 21 trumps other than the unnumbered Fool card.

During this period there was revival of interest in the esoteric spiritual traditions of the West and other cultures, including ceremonial magic.  Many thought the four suits represented the tools of Medieval and Renaissance magicians like the wand and staff (staff), cup, blade and knife (sword), and lamen (disk), a geometric talisman of wax, metal, or paper used when invoking spiritual beings.

Since each suit was associated with one of the four classical elements (wands = fire, cups = water, swords = air, coins = earth), a new set of Victorian magical tools developed, inherited by most contemporary magical traditions like Wicca. The Magician card morphed from a street performer to a ceremonial magician with an altar bearing elemental tools.  The large floppy hat of the medieval card became a lemniscate halo,  a horizontal figure eight, associated with infinity.

The Magician card is traditionally associated with the number 1.  1 is paradoxically the greatest and the smallest of the numbers.  For example, the Magician card is sometimes known in French Tarot as Le Petit (“The Little One”) because it has the lowest value as a trump.  However in many numerological traditions 1 represents potential, unity, and the Divine as the source of all things.  Rather than an actual number, one was considered the well spring of all numbers.

The Magician is not only the first numbered trump, it also depicts the aces on the card, the first of each suit.  Because the numbers 1, 10, and 4 are related symbolically, some believe that the structure of the tarot was inspired by number mysticism, with its four suits of ten pip cards.  Because we use a decimal number system, grouping numbers in tens, 1 and 10 represent the beginning and end of a cycle.  10 and 4 are traditionally related because 10 can be understood as the sum of 4 + 3 + 2 + 1.Â  Both numbers represent a unity of parts to a whole.