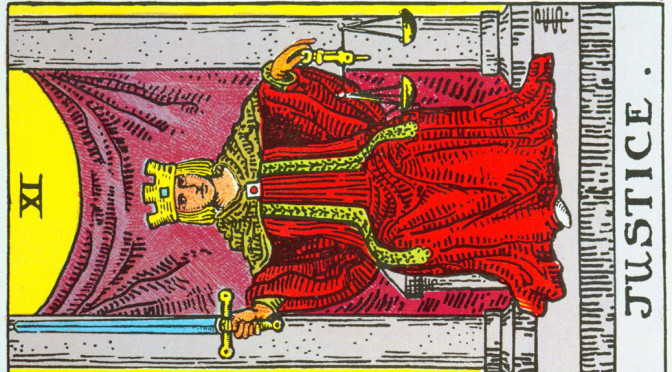 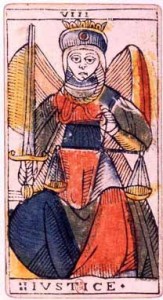 (An early 18th century Justice card, from the Jean Dodal version of the Tarot de Marseille, after which most 19th century esoteric decks were based.)

Numerology focuses primarily on numbers between 1 to 10.  Anything higher is reduced down by adding its digits together, until a smaller number is reached.  For example, 11 may be seen as an extension of 2 because 1+1 = 2.  Like the High Priestess and Judgement, some of Justice’s meaning derives from its relationship to 2.

The earliest surviving tarot decks have unnamed and unnumbered trump cards.  From the 16th to 19th centuries, different printers in France, Switzerland, and Italy produced similar looking decks, adding both names and Roman numerals to the trumps.  The printing press made the tarot accessible to the general public and helped standardize the number, order, and appearance of the cards.

This group of similarly looking decks was later named the “Tarot of Marseille”.  The pattern may have spread from the French port city, a major manufacturer of playing cards historically, but likely originated in Italy.

Almost all decks today follow a variation of this Tarot of Marseille sequence. The Hermetic Order of the Golden Dawn, a Victorian magic society interested in Western esoteric traditions, believed the tarot trumps signified the twenty two letters of the Hebrew alphabet and corresponding elements, planets, and zodiac signs.

(The Justice card from the early 20th century Rider-Waite deck, after which most of our contemporary decks are designed.)

Their model switched the positions of Strength and Justice, associated with Leo and Libra respectively.  The Strength card shows a woman with a lion, like Leo the zodiac sign.  It was changed from 11 to 8.  The figure of Justice bears scales like Libra.  It was changed from 8 to 11.  The Golden Dawn believed this reversal corrected an occult blind, an intentional mistake used to conceal information from the uninitiated.  The early 20th century Rider-Waite deck preserved the switch.  Since most contemporary decks are based upon it, this modified sequence became the standard.

Besides this change in order, the Justice card has remained very consistent over time.  Both the early 18th century Marseille deck and early 20th century Rider-Waite depict a seated crowned woman, facing forward, with a sword in her right hand and scales in her left.  The Rider-Waite places her between two pillars, like the High Priestess.  Justice is not blind in the tarot, that motif became popular during the 16th century.

This imagery is typical of Medieval and Renaissance allegories of Justice.  Her iconography ultimately derives from representations of the Roman goddess Iustitia (“justice”), herself modeled on the Greek goddess Themis (“custom, law, right”).

Three out of the four cardinal virtues are tarot trumps: Justice, Temperance, and Strength.  Only Prudence is missing. However all four are found in the Minchiate, a 15th century Florentine deck similar to the tarot but with 97 cards.  This has led to speculation whether the card is missing or signified by an existing trump, from the Hanged Man to the World.