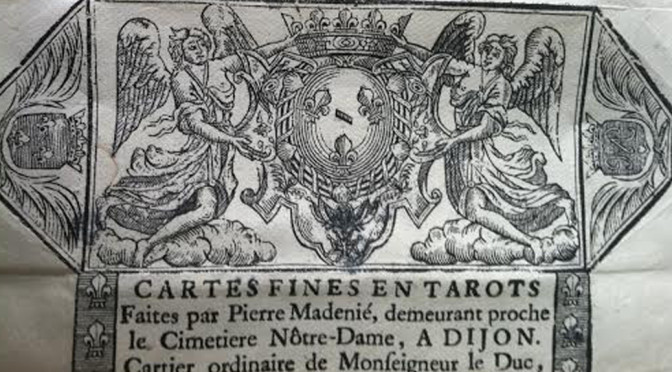 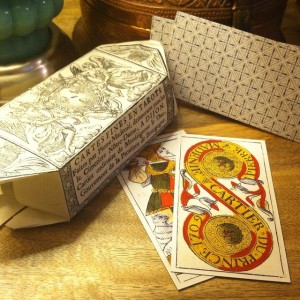 I just picked up this beautiful reprint of the Pierre Madenie deck by Tarot de Marseille Heritage.  (I have no affiliation with the company.)  It was originally produced in Dijon, France in 1709.

The reproduction illustrates a few points about historical and contemporary decks we’ve been discussing lately:

1: Outer Wrapper:  Traditionally playing cards were sold bundled in decorative paper wrappers.  This proved the deck was new, advertised the publisher, and could be stamped to show that taxes had been paid.  Today’s folded paper box and sticker seals are their direct descendants.

2: Maker’s Mark:  At least one card usually bears the maker’s mark and printing date.  A ribbon on the 2 of coins is often used in the “Tarot de Marseille” pattern, other decks use the ace of coins instead.  The ace of spades plays this role in both American and English standard playing cards.

3: Blank Cards:  After being printed on large sheets, playing cards are cut into their individual sections.  Because the tarot has 78 cards, rather than a more even 80, the process typically produces 2 spare cards.  Contemporary manufacturers turn these extras into title cards, advertisements, or leave them blank.  Some people use the blanks in readings to signifying mystery, the unexpected, or the divine without attributes.

The two spare cards in the Pierre Madenie reprint are title cards , one in French, one in English. 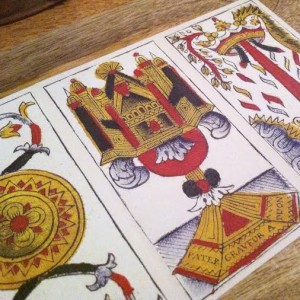 4:  Order of the Four Suits:  The tarot is usually organized with the trumps on top and the four suits beneath them in sequence, Ace to King.  When I opened the Pierre Madenie deck, the order was trumps then batons, coins, cups, and swords.  Other sets vary.  However most contemporary decks theoretically, and sometimes literally, consistently group the cards as trumps, then staves, cups, swords, and coins.

In card games like bridge, the four suits may be relatively ranked.  During bidding spades are the highest, then hearts, diamonds, and finally clubs.  In traditional tarot games, the trumps rank higher than pip and court cards and are higher or lower than another trump depending on their number.  The four suits themselves are all equal.

So while the sequence of the trumps is derived from the original game, this arrangement of the suits is another late 19th century development.