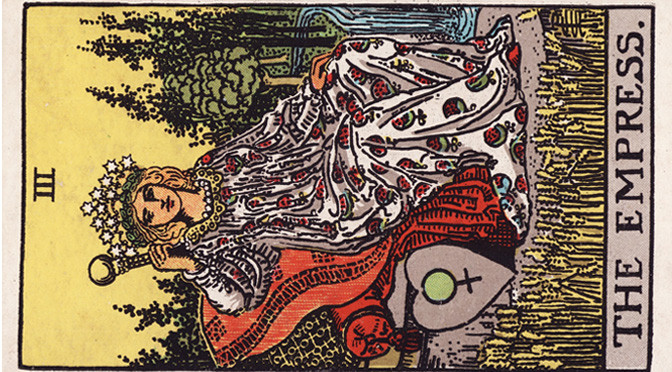 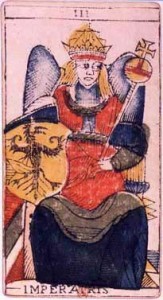 (An early 18th century Empress card, from the Jean Dodal version of the “Tarot de Marseille”.  Most 19th century esoteric decks were based on this older pattern.)

The Empress is typically the third card in the sequence of trumps.  It usually depicts a crowned woman sitting on a throne, with a shield in one hand and a scepter or imperial orb in the other.  Because the draped back of the throne resembles wings in some older decks, the Empress herself may be winged in later representations, like the late 19th century Wirth tarot. 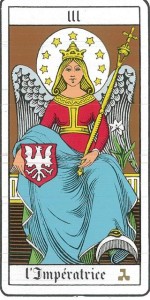 (The winged Empress from the late 19th century tarot  by Oswald Wirth.  The deck only uses the 22 trumps.)

Many tarot trumps have obvious partners, like the Empress and Emperor.  In the “Tarot of Marseille” pattern they both hold scepters and shields decorated with a single or double headed eagle.  This is the heraldic device of the Holy Roman Empire, a confederation of states spanning from Northern Italy to Germany that lasted from the 9th to 19th centuries CE.  As the “king of birds”, the eagle is a traditional symbol of imperial power, used even earlier by the Roman and Byzantine Empires. 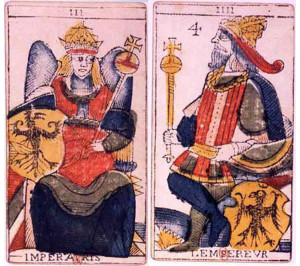 (The Empress and Emperor in the Jean Dodal version of the “Tarot de Marseille”.  They carry the same attributes but in opposite hands, even the eagles face different directions.)

While the tarot has four Queens, it only has one Empress.  The card represents the highest position of temporal power available to women historically.  A woman holding symbols of imperial authority is also a standard allegory of the State, just as the Popess could be a representation of the Church.  During the 18th century the Papess, Pope, Emperor, and Empress were replaced in some regional decks because their imagery was considered sacrilegious or subversive.  For example, the Empress was replaced by Juno, the Roman equivalent to Hera, queen of the gods, in the “Tarot de Besanon” pattern, associated with the card manufacturing city in eastern France. 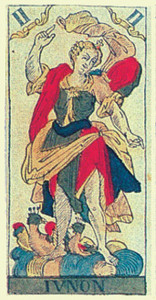 (Juno from an early 19th century “Tarot de Besanon“.  The Emperor was replaced by Jupiter, the Roman equivalent of Zeus.)

Authors during the late 19th century to early 20th century produced their own rectified tarot decks, believing they were correcting the title, imagery, and meaning of the cards.  They transformed the Empress into a more transpersonal figure.  The iconography of the enthroned woman developed in prehistory as a symbol of the Divine Feminine, usually accompanied by a pair of animals or a child.  This imagery has been repeated cross culturally from the Egyptian Isis, to the Anatolian Cybele, and the Christian Mary. 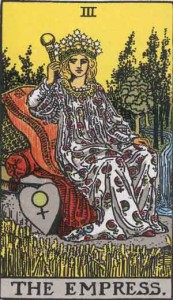 (The Empress card from the early 20th century Rider-Waite deck, after which most of our contemporary decks are designed.)

Both the Wirth and Waite versions incorporate imagery from the Book of Revelations:  “A great sign appeared in the sky, a woman clothed with the sun, with the moon under her feet, and on her head a crown of twelve stars.”  This Woman of Apocalypse is commonly interpreted as Mary.