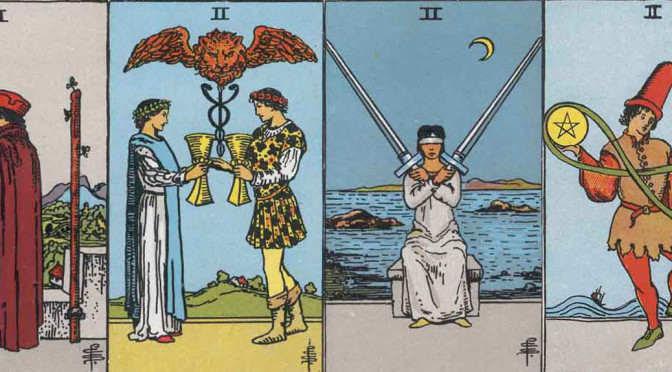 What do the two’s represent in playing cards?

The two of each suit is also known as the “deuce”. The word derives from the Latin duo, meaning two. Deuce itself comes from the Middle French deus and originally meant “a roll of two in dice”. In games of chance with two dice, it is the lowest score possible, equivalent to the modern “snake eyes”. Like the ace, the deuce originally signified bad luck. In card games where the ace is high, the deuce becomes the lowest card.

Deuce is traditionally a euphemism for the Devil, as in the expression, “What the deuce!”. Just as 1 may represent unity, 2 can signify change, conflict, or duality, like the separation between God and Satan.

Where do the images on the two’s come from?

Historically the pip cards were marked with different suit signs, in their respective numbers. For example, the two of cups literally has two cups on it. Some decorative elements may also be added, like vegetation. The notable exception is the late 15th century Sola Busca tarot, whose numbered cards have illustrated scenes incorporating the suit symbols.

Most contemporary decks are based on the Rider Waite, originally published in 1909. It was the first modern tarot to have illustrated pip cards, court cards, and trumps. A. E. Waite and Pamela Colman Smith were inspired to do so by the Sola Busca tarot, even adapting some its cards. Photographs of the deck were exhibited in the British Museum in 1907, making its imagery available to the public again.

Where does the meaning of the two’s come from?

Most contemporary card meanings are influenced by:

1: Numerology: The numerology of the tarot has been influenced by both Classical Greek and Jewish thought. The 19th century author Alphonse Louis Constant, writing under the pen name Eliphas Levi, theorized a connection between the ten numbered cards of each suit and the ten spheres of the Tree of Life in Kabbalah. For example, the pip cards from 3 to 9 are associated with one of the seven classical planets, taking on its characteristics.

2: Elements and the Suits: The most popular model of the four elements and suits also comes from Eliphas Levi:

Each suit took on the characteristics of its element. For example, the cups may represent emotions, the unconscious, and intuition, all derived from the symbolism of water.

3: The Astrological Decans: The tarot was popularized by the Hermetic Order of the Golden Dawn, a Victorian magic society interested in Western esoteric tradition.

They associated the pip cards from 2-10 with one of the 36 decans, Egyptian divisions of the zodiac signs, all ten degrees wide. Each is ruled by a different planet. The astrological compatibility of the planet and sign was used to determine the meaning of the card.